Started YNAB in earnest in October of 2020. Progress thus far is basically that we’ve stopped creating new debt. And fixed a lot of previous bad spending habits. (Impulse purchases still spring up, but many more are squashed)

Basically we’ve stopped adding to our credit card debt and have a general understanding of how much it costs to maintain our current life. Other than reigning in impulsive spending, we haven’t made many other changes in terms of reducing our outflows.

So overall, definitely a good year. But now, it is time to start making some progress. I feel that sense of, “It can’t be like this forever” frustration rising in me… and especially with my spouse. I think they definitely need a few carrots harvested soon or they are going to fall off the wagon. (To be clear, we have kept some spending money in the budget and neither of us are going “without”)

Early and mid-forties; We make “good money” … so much that we just went along without ever having serious budget discussions. I did a number of budget systems, listened to Dave Ramsey’s TMM audiobook (twice!), and even made a really sophisticated google spreadsheet that was meant to forecast and turned into a yearly calendar of spending… it was all really enforcing a bad system (oh, how much I’ve learned in 12 months) of looking to see if the amount in the monthly paychecks was bigger than the monthly bills and then moving on with life. (It always was… yet credit cards kept slowly climbing up… how weird.) I tried a number of things, but none really stuck with my spouse. And without them onboard, none of them really stuck with me. (Heck, I even got a YNAB 4 license through a software bundle back in 2014! I bought a lot of software back then… part of the issue, I’m sure.)

There were many other things that contributed to our current situation, like, we managed our money separately without ever really talking about anything and who was paying for what when.

So, my spouse finally hit their limit last October. Not sure how or why, but they were at their wits end and willing to do or try anything. I still our had our monthly expenses calendar and was keeping it up to date, but I knew that wasn’t going to work. Enter YNAB.

I started building the budget in October 2020 and we started using it starting November 1st, 2020. Our YNAB renewal date is November 29th. (it’s in the budget!)

That is just the debt and not our monthly expenses. The only minor, good news was that after “doing the budget”, we had enough to pay credit card minimums and monthly bills as well as what we believed to True Expenses. (Oh… how much we’ve learned!) and begin a trickle into an emergency fund.

I watched all the YNAB YouTube videos (Thank You Hannah, and Ben and Ernie… and Nick True), I listened to Jesse’s YNAB podcasts, I even dusted off Total Money Makeover audiobook (I didn’t like tone, but some of the info was still pretty good)

Thing is, now I want to start accelerating this puppy.
But it feels like since the pressure is off or released to where my spouse isn’t having a breakdown, I’m back on the front lines by myself.
They get it, but don’t really *get it*… The cooperation is there, but not the “let’s get radical” and really blast out of the hole.

The thing that sticks in my craw
We pay $2k in credit card minimum payments monthly
$1 of that comes back in interest.
So $2k out, $1k benefit (that’s why we went from 75 to 63… there is no spending on these cards for the last 12 months, but they are still costing us)

Even with pinching a couple hundred out of the budget (which would be the “let’s get radical”), I don’t think it moves the needle all that much.

Debt Repayment
So I modeled out our debt payments
https://www.vertex42.com/Calculators/debt-reduction-calculator.html 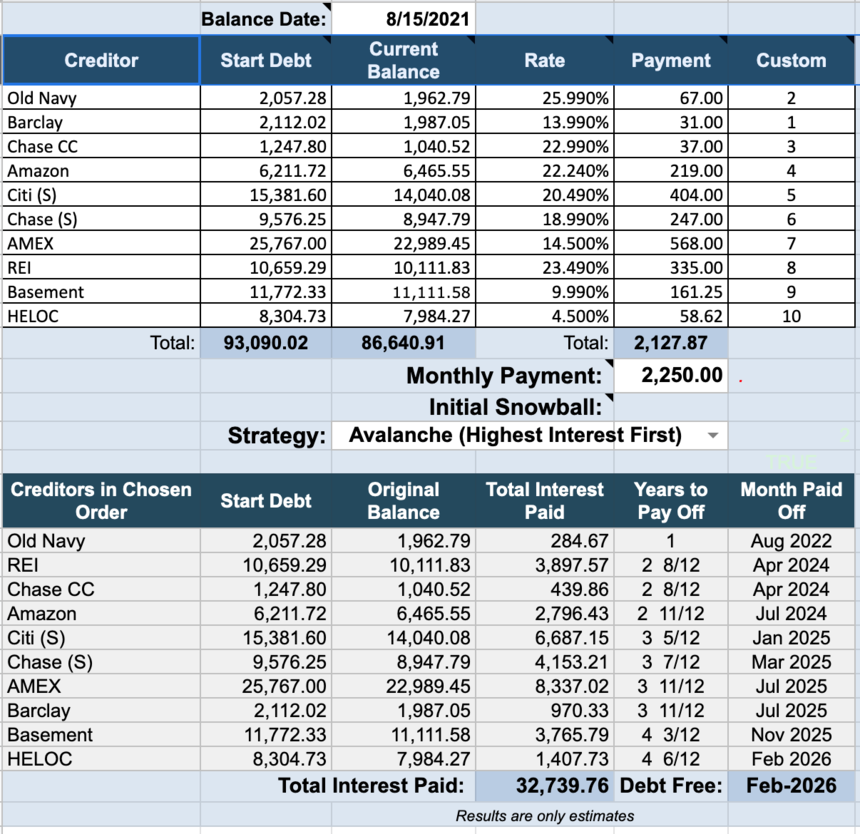 If I took out a 401k loan for $40k, that would squash a bunch of high interest 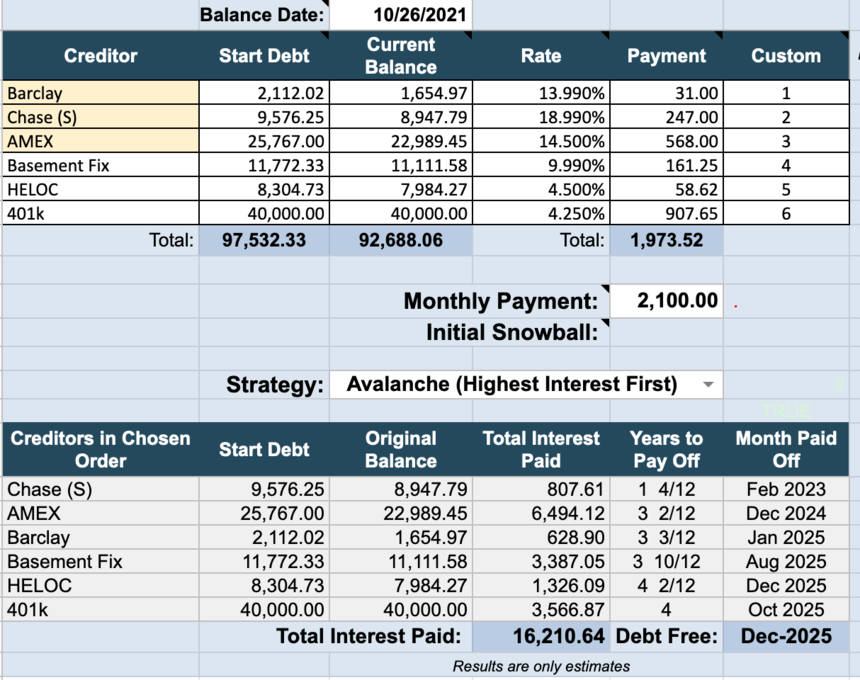 It would accelerate our departure from debt by only 3 months…
BUT, it would reduce our interest paid by $16k
It would also greatly reduce the number of monthly payments and the general stress involved with multiple credit card bills\dates

Understanding that we would lose some compounding interest by taking out 40K
calculated that I would lose potentially about $7k in savings in the 401k
(https://www.vertex42.com/Calculators/compound-interest-calculator.html)
That would reduce our overall savings down to $9k 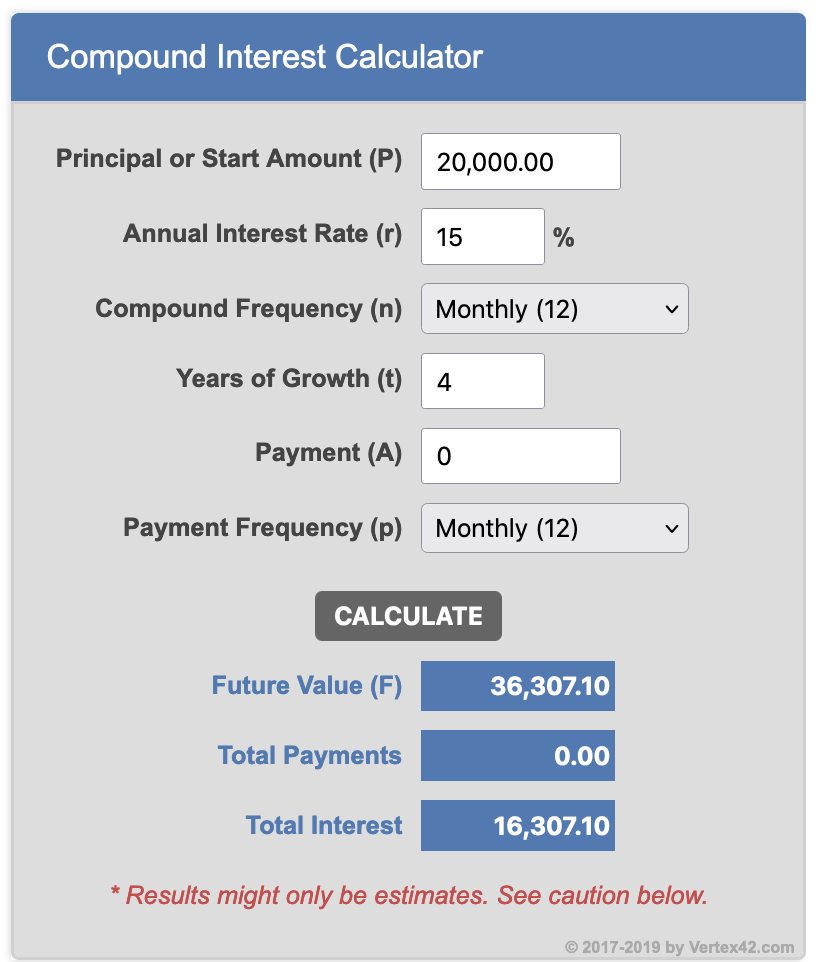 Here are the PROs as I see it

I KNOW the 401k loans are greatly frowned upon.
But they are usually because they are seen as the easy way out in terms of not having managed the overall spending and budget.
We have a solid YNAB budget, with money going to most true expenses (even things like YNAB and AAA renewals)
We’re slowly building up an emergency fund, but it’s slow going due to everything you see above.

I know we, as YNABers,  have lots of subjective feelings on 401k Loans (DON’T DO IT, pinch more, side hustle etc…)
I’ve read as many threads as I could find on the forums, but I’ve not seen the math behind any of them or any nitty-gritty details.

Hopefully someone in a similar situation can use the above method and links as some resources to do their math.

For the record, I’ve discussed with my spouse and they are of the, “if it’ll work” mindset… though they aren’t interested in splitting the 401k loan into 20k for each of us.

I honestly haven’t decided either way, though it may sound like I have decided to do the loan… pushing the button is a whole different affair.

(if you’ve made it this far, thank you… you must be a Super YNAB Angel)

So I guess, in the end, my question is, are there any considerations I am missing? Something I haven’t thought of that I should add into the overall decision making process?

Thank you so much for even being interested. And thanks for the countless amount of advice I've gotten from this forum.

(also, if you found this even mildly helpful or similar to your situation, I'd be interested to hear about it.)